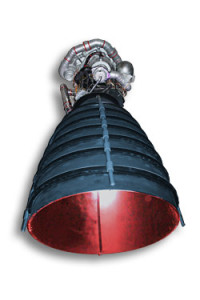 ACCENTform was commissioned by Creative Services KG to produce an exhibit where the visitors experience the effect of blasting off into space.  This true 1:1 fibreglass replica of a space shuttle rocket engine is displayed at the German Aerospace Centre (DLR) in Bremen. The aim was to comply with the customer’s requirement that both the insides and the outsides have an authentic-looking surface that realistically captures the look of the space shuttle main engine assembly.

The engine nozzle, made ​​by ACCENTform, was installed vertically, in the correct height of nearly 5 meters (5.5 yds.) and assembled on-site.  This was a huge challenge for all persons involved.  Thanks to the FRP material, the rocket engine had the following final specification:  2.23 meters (2.4 yds.) in diameter, 2.7 meters in height (3 yds.), was extremely light, weighing in at 100 kg (220 pounds) and also very stable. Because the access area of ​​the exhibition hall was tight and hard to access, the engine nozzle has to be divided lengthwise into four single parts that were manufactured separately and then assembled on-site to form the finished rocket engine.  Finally, the entire engine nozzle, with a total surface area of approximately 25 m² (27 yds².), was painted in matte black. 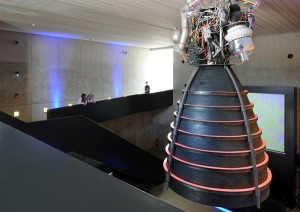 In order to provide visitors with a unique and tactile experience, the requisite fuel pumps were installed by the client and for added realism, an infrared heater was mounted inside the shuttle engine. To comply with existing safety regulations,  ​​ACCENTform made the fibreglass model in the fireproof design according to DIN 5510 (S4, SR2, ST2) standards. Because of the radiant heating, the visitors standing beneath the rocket engine felt an intense afterglow, while above them the imaginary space shuttle lifts off into space. 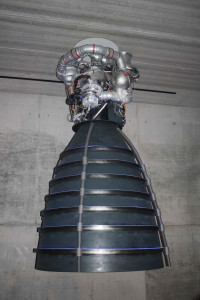 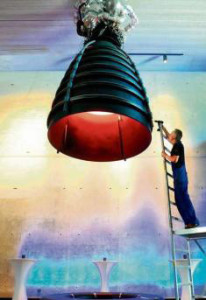