Sphere for the Tyrol Festival; ⌀4m 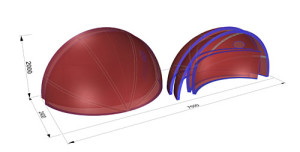 Erl, is a small village in the Tyrolean region of Austria.  It has 1,500 inhabitants, a handful of hotels and many cows.  Erl is included in a very special part of history: In the 17th Century, the war-torn inhabitants swore an oath that every six years they would perform the Passion of Jesus Christ, if they were spared from the horrors of further wars. Erl was spared; and to this day, Erl performs the Passion play.

Since the Passion playhouse was constructed in 1959, the Tyrol Festival in Erl is performed in the bold and strikingly designed theatre. The playhouse has become part of the village.  Similarly, the inhabitants of Erl, are part of the Festival as its actors, fire brigade members behind and on the stage, technicians, hosts and much more. This close relationship between the citizens, Passion play association, and festival makes the Tyrol Festival in Erl truly distinctive. 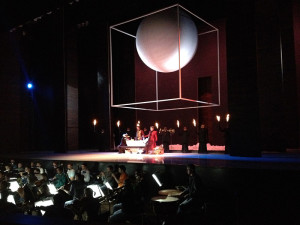 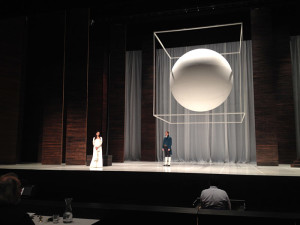 For the Tyrol Festival in Erl, ACCENTform made a giant sphere 4 meters (13 feet) in diameter, and mounted it to the ceiling. It was assembled from eight parts.  The orb is not only extremely stable, but weighing just 375 kg (825 pounds) is very light at the same time. The object was made from the 4 mm (0.1 in) thick fibreglass laminate in the fireproof design according to DIN 5510 (S4, SR2, ST2) standards. The surface was painted matte white to avoid any reflections of the stage lightening.